This was written as a bit for my nephew who is into comedy. Not sure that it works as a comedy bit, but I liked it enough to share. So here goes.

Ants ant, anteaters anteat, and bees… Well, bees bee. What about us people? Look around. Are we humaning right?

Our big brains, social tendencies and walking on two legs are our specialized equipment, like the ant’s antennae and the bees wings. So gathering in goodwill is fundamentally human. This week, you may look back on this moment – this moment without texting, without driving, without TV watching, scrolling, screening, screening, screening – and you can be assured that at you had at least some of the time this week engaged in deeply human activities.

AND WALK! Walking is another of the deep, human Good Stuff. Walk if you can. It’s fundamental to who we are and how our brains are structured. I mean, brains MUST be specifically formed to walk well and for that the be a source of health. JUST WALK.

Since I’m so good at giving advice, I’ll give you more.

Get a good backpack. Then you are really cooking! You can carry stuff around now. The backpack is an ancient technology and found across ancient cultures. I’m just making that up, but I bet its true. Anybody that has carried a gallon of milk six or seven blocks will sing the praises of the backpack. And nowadays you can get a REALLY good pack. There are materials to wick moisture away from your body, carry your laptop in a padded pouch. With great padded straps. And adjustable. Everything adjustable! So get a good backpack AND WALK! You can do it anywhere. Walk at the Museum of Life and Science. You can walk in the WallTown neighborhood of Durham where I live. You can walk in the woods of Person County outside of Roxboro, NC. You can even walk in Porbandar, a city in the state of Gujarat on the coast of India.

On Wikipedia’s Porbandar page there is a picture of a street that looks like a theater set for one of Shakespeare’s plays. Elizabethan style except in bright pink and yellow color. And the motorcycles and bikes and pedestrians. Echoes of the British empire, I guess.

Mahatma Gandhi used non-violent resistance to drive the British out of India after being there for 89 years. He was born in Porbandar, and was a big walker, too. He once walked 238 miles barefoot over 24 days. And this was across rural India in the 1930’s. Walking toppled the British Empire. Big brain, social nature, and walking on two legs. It works. It really does.

I don’t think I’ve ever seen a picture of Gandhi with a backpack. Backpack is the original walking technology. Well, second. The first was probably a stick.  I have a few sticks in my house. I trust a home with a stick or two. I think I’ll stop there and leave it at that.

I was going to end there. But then I thought of a funny observation that as soon as humans reached the pinnacle of backpacking technology and availability of new materials like goretex that made it possible to be outside in ANY weather, I started was in about the 7th grade. I thought it was really cool to wear the pack with only one strap. It was cool.

No hating here. “lf it’s good enough for the neolithic, it’s good enough for me”, I say. If you look to our past waaaaaaay back, you might look and see a small movement. You squint. Yes, now you see. Our distant ancestors waving their arms. As if to signal “STOP!” Wait. My bad. Wrong direction. We were looking towards the future.

My mother gave me a letter yesterday that I had written to her in 1990 while she was studying Afro-Caribbean folk tales. Reading it took me back and reintroduced me to my cheeky 15yo self that I admire and want to keep close to. Live music is definitely a through line.

Its been less than a year since I joined the board of the North Carolina Songwriter’s Co-op. My role on the board is to keep the Open Mic listing page updated with the dates and times of open mics across the state. As a result of knowing when and where nearby open mics were happening, I began to go and perform more frequently.

Most open mics are low-key events in a bar or coffee shop. Usually there is a host who monitors a sign-up sheet, opens the show and introduces the performers. The Moondog Meadery has a great open mic hosted by the incomparable combo of comedian Deb Aronin and singer-songwriter Max Rocket. Since its in walking distance from our place, I go pretty frequently. There is a 2-song limit and I generally open with a cover and close with an original.

Every show has its arc, even a two-song show. I like to explore the link between the songs that I can explain quickly onstage to bring the audience along. Last week for Moondog, I was prepared to open with You Ain’t Going Nowhere by Bob Dylan and close with Gaia’s Green Umbrella from the new Living Earth EP. I see them as linked because Gaia’s Green Umbrella describes a Climate Prayer Protest where the prayer is for elected leaders to ‘do something about the climate’. The Dylan tune can be considered a follow-up phrase. I sing the lyrics found on the Byrds album. They work better as a rebuke to wealthy elites who continue to prioritize their own wealth over planetary health!

But instead of doing that pair, I switched at the last minute to the pairing of my opener Roots Go Down and Nina Simone’s Feeling Good to close. When performing, I have started to describe Roots Go Down as a ‘hymn of the future’. I imagine that in 200 years, we will have achieved ecological balance and Roots Go Down will be a song of Thanksgiving held at the Summer Solstice celebration next to the Eno River. Hand drums, Tamborines, campfires, singing together: sacred good stuff. How is Nina Simone’s Feeling Good related? The imagery for one! And she sings directly to Nature of a connection so strong.

Is it a coincidence that we celebrate July 4, Juneteenth, and Solstice around the same time? Should late June – early July be called the Freedom Season? Fulfilled a long time goal of mine to play the Eno Festival. What a great river.

After the curve at the upper pasture at City Lake, the road slopes down towards a sometimes shady patch of grass, frequently moist. This past winter, I divided the patch of Joe Pye Weed we have growing in our Durham backyard into two and planted half in the moist, rich soil at City Lake. Periodically, I check to see if the spring growth is coming up and this week I saw the shoots. Reddish at first, with the whorls leaf ends pointing up. Like the black cohosh that emerges at about the same time. And the gil over the ground was servant blanketing a large area with those beautiful lilac colored flowers. I know that by mid summer there will be only a trace of the abundance that defines the area now. Easy come, easy go. 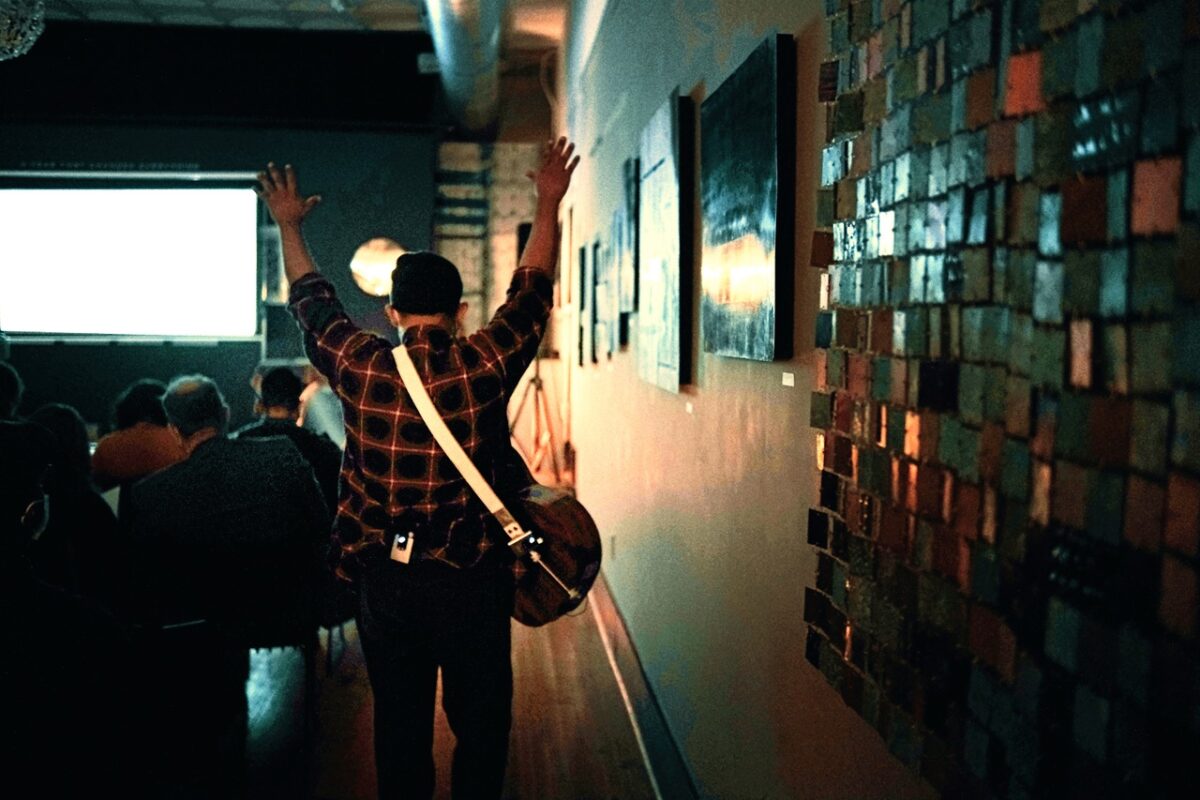 My favorite part of the show at PS118, the Horse and Buggy gallery space, was when people in the audience took over the set list.

Travis Cohn kept the rhythm thumping. We missed Josh on the bass due to a COVID exposure.

We live streamed the event on Facebook — captured the first 20m or so.

The Tao Te Ching is a medicine for society that helps remind us of our wholeness when we focus on the separateness.

On Facebook, a friend posted a picture of a daffodil, captioned ‘At Last.’ First thought was, “Isn’t it too early?”

Then I thought of the bulbs I planted along the property line up at City Lake. I dug them up not far from the property line and I expect them to thrive similarly in similar soil. Picturing a line of yellow daffodils that mark the boundary in an explosion of color every Spring, but lay low mostly otherwise.

In a planting mode, I went to the high area above the ephemeral stream and next to where the ferns grow. There, in a circle around the three wild Hawthorne trees I recently discovered, I planted Hawthorne seed.

I figured that the native Hawthorne may enjoy the company. I’ll do my best to make them all feel welcome☺️. But seriously, me and Hawthorne go waaay back and I appreciate the physical and spirit medicine that Hawthorne offers. Heals the heart.

This MLK Day afternoon, we pulled trash out of the Ellerbe Creek tributary running by the old YWCA near downtown Durham. It took us a while to pile out of the house and I was frazzled by the time we got into the car to drive there. This was Lanya’s idea and I was mostly just going along in the name of family time and doing service today because, well, that’s our family habit.

After 10 minutes, I was feeling so glad to be there in nature. Yes, the power lines were running overhead to the nearby substation. Yes, there was trash — plastic bags trailing from branches left high on the banks by the last storm– and broken glass everywhere. Yes, there was a den clawed in the bank, obscured by a few roots. Yes, there were fat worms wriggling beneath a dislodged stone. Yes, there were raccoon tracks, revealing a local’s evening activities. This was shaping up to be a magical Day of Service. Thanks, Lanya.

It came as a revelation that I wasn’t doing this cleanup to tidy. This was an act to repair some of the damage humans have inflicted on the living Earth. Or an attempt, in any case. Getting plastics out of the environment — even on a very limited scale — is an act of repair.

But why wait until the plastic deli bags wind up in Ellerbe Creek? Why not stop their migration at the source. Why not quit buying or using plastic? Well, it seems REALLY difficult because so, so many products have plastic parts or packaging.

I’m really not sure of where to start with my plastic diet. Maybe something like a food log but for plastic. How much do I really use? How much do I use that is totally optional? Hopefully I’ll keep asking myself these questions.

We need a new political party, for sure.

A party that has a priority focus on keeping the Earth healthy and safe. A party that fundamentally challenges and changes the way humans interact with the terrestrial environment.

A party that does this — while also maximizing personal freedoms — is needed.

Adapted from Tao and Politics